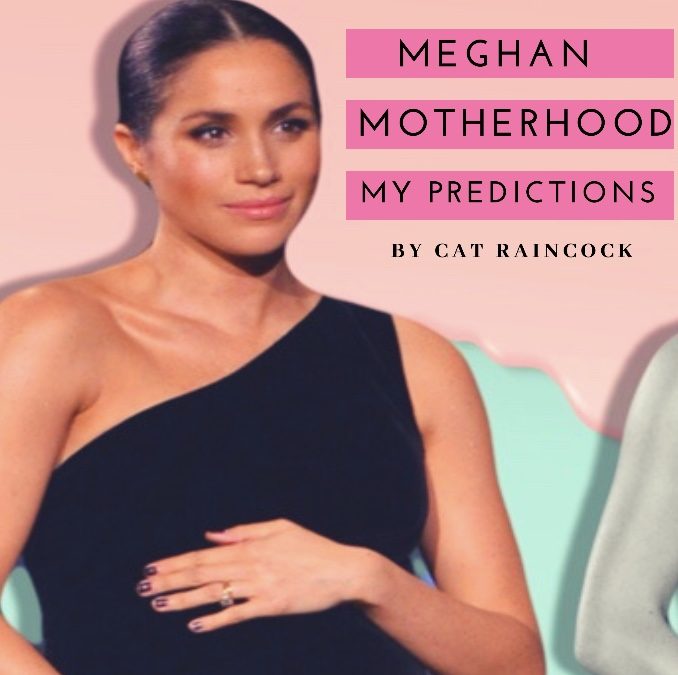 When did baby Archie arrive, how was he delivered and the list of questions we have about the new royal babe are endless but

as a women’s mentor and clinical hypnotherapist I make some predictions on how, after much research, I think the Duchess of Sussex, Meghan Markle will approach the birth of her first child.

Royal protocol has certainly been challenged with the introduction of the Hollywood star to the corridors of Buckingham Palace and I sense this may continue.  As a mother myself, I know the hurdles that have to be navigated with a large buggy but how will the Duchess cope?

She is a yoga doer and at the forefront of empowering women, not least by the way she has chosen to hold herself in royal circles and it’s a breath of fresh air.  My hunch is, her yoga flow and spiritual side might be called upon to bring calm and ease to the trials of motherhood, cue the modern earth mother wafting through Buck house.  Let’s explore..

I think there will be far less buggy action and much more of an earth style mother approach with my prediction being, we will see Meghan sporting a baby carrier and returning to a more natural way to transport her little one from palace to palace. The benefits are profound and support both mother and baby’s development.  When a baby rides in a sling attached to its mother, the child is beautifully in tune and connected with the rhythm of its mother’s breathing, the sound of her heartbeat, and her movement.   The sling is much like a “transitional womb” and encourages connection, a sense of security and protection and research has shown that premature babies who are touched and held gain weight faster and are healthier than babies who are not.  The sling is a powerful tool to help fathers connect with their young so a neutral coloured sling will be selected to suit both Harry and Meghan of course.

In line with the earth mother approach, I have a feeling that Meghan will do her best to choose breast.   Imagine the gasps of relief from mothers across the globe when Meghan breastfeeds her baby, dare I say, in public.  Fellow royals may gasp in horror but wouldn’t this be the green light for women to finally be proud of the most natural method of feeding their young?  I think we might see the ultimate empowered mother step out and break royal protocol and embrace the bottleless approach to feeding.   Apart from increased immunity, lower risks of obesity and other future diseases this method creates a natural bond and ultimately a sense of security and confidence with both mum and child.  It wouldn’t surprise me if Meghan is seen feeding like this beyond a year if not two.   Breastfeeding to 3 and 4 years of age has been common in much of the world until recently in human history, and it is still common in many societies for toddlers to breastfeed.  Now this really would break the palace norm!  Nevertheless if breast doesn’t prove to be the most suitable method, she may well be a spokes woman to support those mums that have struggled with the natural method, despite the desire to.

Thomas’s may not get the nod this time around and we could see Meghan adopt a more Scandinavian approach where children are schooled later and encouraged to learn through play where the main aim of early years education is not explicitly to educate in the formal sense but the promotion of the health and wellbeing of every child.  If keeping the little one at home isn’t an option, our very own Duchess Earth mother may be seen dropping her little one off at a forest school where learning in nature is the focus.  Either way, I sense empowering her child to grow and develop naturally will be her focus.

Will this be the end of night nannies in the royal palace, I think so.  I can see Meghan co-sleeping with her little bundle.  Nights off for her might look more like this: expressed breast milk for Harry to do during the late shift or a gentle tap on her shoulder from Harry for her to feed and he to resettle.  The joint parenting will be evident and this would allow time for Harry to connect and bond with the new one.  Co-sleeping seems the perfect set up for the Duchess and her bundle – when mother and baby are close, it is believed that both rest more soundly. When a baby is right beside her, mum doesn’t need to get out of bed to pick her baby up for a cuddle or to feed baby and for many co sleeping is the answer to reducing sleep deprivation while still meeting all of baby’s nighttime needs.

The affliction that burdens many mothers in modern society with the matriarch expected to be everything to everyone all the time.  Often this crops up when the mother returns to work and the conflict that arises there.  I think we will see much more family outings to royal events where the child comes too, a perfect combination of work and family time combined.  Perhaps we will see Meghan’s mother attending more events too as the added pair of hands to support Meghan’s needs and of course the royal child.  Mum and babies historically surrounded themselves with a host of women to support and nurture both mum and child and I think we could see Granny Doria heading the camp and leading from the front.

We may never know how the birth went and when exactly it took place but it wouldn’t be a stretch to imagine a home birth in a warm tub of water, historically most royal births took place behind palace walls or royal residences.

All in all, we believe that we can expect a far more organic approach to motherhood and a return to the more natural ways to rear a little one.  Make way as we witness an empowered royal woman embracing motherhood in its truest form.   I think she might be breaking some more protocols along the way.  Here’s to a more refreshing maternal muse to aspire to – Move over Gwyneth, Mummy Meghan is here (apparently).